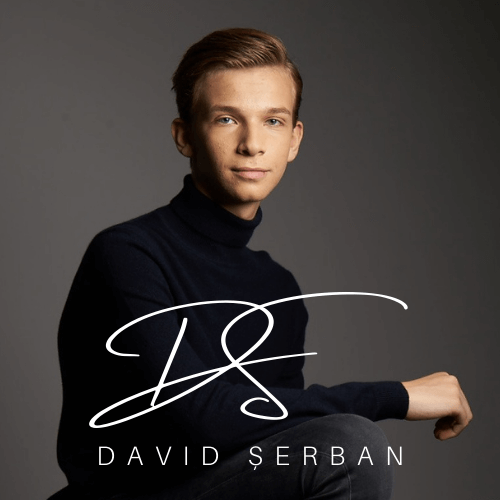 At 17, many kids of his age have never even seen a real racing car. Maybe only through video games, where crashes mean one more annoyance and one life less. One of the three, four, five lives the game provides. But in real life, there’s no room for error. Every mistake is paid for dearly. David has had plenty of time to learn this, from his earliest years, when he first got his hands on a kart.

But since then, his passion for speed and high-horsepower engines has made him a multiple champion, both at home and abroad in endurance competitions.

Perhaps David had no idea when he first stepped onto a karting circuit that in just a few years he would be climbing to the top of the podium. And not just in karting. And not just in Romania. But also in Spain, where he made a sensational performance in 2019 in the CER-GT, the Spanish Endurance Championship.

He went karting when he was just 9 years old and, like any boy his age, was keen to learn to drive. Fast. Faster and faster. Faster than everyone else.And even as the years went by, and trophies began to be won, the passion remained the same. In fact, it’s grown in intensity! What if?..

And from karting to motorsport was just one step. A small step for him, a natural one for all those who supported him and believed in his innate talent, considering that he has been participating in endurance racing since the age of 13. Side by side with experienced drivers with whom he competes on equal terms. And defeating them, according to the stopwatch.

“Adults look strange at me when they see that I’m with this car and not participating in the junior class, with smaller cars. They look very strange because it doesn’t seem to them that I could participate with them.”

“Usually the other drivers look strangely at me when they see me in the pits.” David said in an interview. “Especially the first time they see I’m with this car (n.r. Audi R8 R8 LMS GT4, the car David is racing with) and I’m not competing in the junior class.. They look very strange because it doesn’t seem to them that I could participate with them.”

The podium, a place David knows from a young age

And that’s because David is ambitious. And he knows that without a high-performance car and a strong team, a driver can’t do much. Even if he’s talented and even if he wants to win very badly. But with the Willi Motorsport and Carbogaz Racing team, his competitive start could only be rewarded with great results.

Thus, his racing career started in 2018, when David, driving a smaller car, a Ginetta G40 GT5, won the Romanian Endurance Series. But before long, he was able to push the limits of that car to the point of peak performance. And then it became obvious that for the next season his talent needed a car to match. That’s how he made the switch to the Audi R8 R8 LMS GT4 he’s currently racing with.

Although he already has two championship titles, David’s long-term goal is to become European Champion. Even though this year the pandemic has thwarted his plans and he knows that such a title requires a lot more work, David continues to train and perform in every race he competes in.